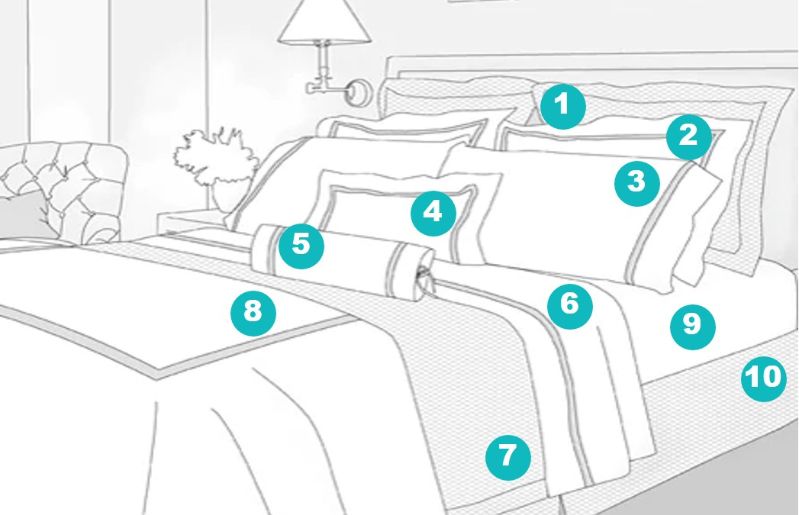 In this article, we explain the meaning of sham. Other than sham bedding meaning, we also describe some of the common types of bedding you’d expect in a bedroom.

You’ll also get to know the difference between a pillow and a sham. Other items included in this article are the purpose of a sham and where does sham go on a bed.

Sham bedding is used interchangeably with a sham, a bed sham, or pillow sham. This way, you can have a concise understanding of what we are talking about. It is technically a pillow added on a bed.

What is a Sham Bedding?

A sham bedding is a pillow placed strategically on a bed for decorative purposes. It is used to transform the regular pillows into decorations that make your bedroom more appealing. Sham bedding or pillow shams are available in traditional pillow sizes.

Unlike the regular king or queen size pillowcase, a sham is usually open in the middle of the back. It has a slightly overlapped fabric, which can also have a hidden zipper for closing. When you visit a store, you will be able to buy pillow shams in pairs and the fabric colors could be those that match your duvet cover.

Yes, you can sleep on pillow shams.

However, the use of these bedding shams is often to provide support when sitting on the bed and decorating the bedroom.

Shams can be placed behind your regular pillows.

Unlike throw pillows, it’s easy to remove shams from their fills and wash or replace them.

After explaining all that, let’s jump into something related: types of sham bedding.

The Purpose of a Sham

The purpose of sham bedding is to improve the decorative features of a bedroom. Shams can also be used for support when sitting on the bed to read a book or watch television.

Other times, although not commonly, pillow shams can be used as regular pillows.

A euro sham pillow is a square pillow mainly used to decorate beds. It is usually placed behind any of the following: standard, queen, and king sized pillows. The size of euro sham pillows is 26 inches by 26 inches.

Each euro sham pillow is covered in a beautiful case called a Euro Sham.

What are Euro Shams for?

Stay away from cheap pillows that quickly flatten and make your rest in bed uncomfortable.

How to Style a Euro Sham

The best strategy to style a Euro sham is to match them with duvet covers. Your Euro pillows should be placed behind plain or even textured complimentary pillows.

Alternatively, it’s elegant to flip the motif and have the Euro pillow shams paired with regular shams as long as they match the duvet cover.

It is possible to take other angles and be more creative and playful with them.

What is the difference between a pillow and a sham?

While a pillow sham has flange or cording around its edges together with a decorative front, a pillow is mainly plain and is covered in a fitting pillowcase.

Another difference is in the size. Shams tend to be smaller, mostly under 30 inches long. On the contrary, pillows are large and are frequently longer than 30 inches.

Is sham the same as a comforter?

No, shams are not the same as comforters. However, sham pillows mostly come in the same colors and fabrics as the comforter.  While a duvet cover is used for covering the entire bed, shams are only used for decorative purposes.

What is bedding? Bedding are materials associated with a bed and often laid above the mattress for hygiene or other purposes including warmth and decorative effect.

While a bed and a mattress are rarely washed, bedding is removable and washable in rotation. People change their bedding seasonally for several reasons.

Some of them include removal of stench and preventing potential breeding of tiny organisms such as lice. The overall goal of having clean bedding is to ensure sleep comfort.

The standardized measurement for bedding are rectangular. However, some sets of bedding are square-shaped while others are circular. The sizes of bedding vary for children and adults.

In the United States, a bed, bed frame and a mattress are not considered bedding. British English includes those three as bedding.

Making a general reference, a set of bedding would include the following:

A bed sheet is a flat, rectangular piece of cloth for a bed placed below or above the bed occupant.

There are two main varieties of bed sheets: flat and fitted.

The difference between the two types is that a fitted bed sheet has two or sometimes four of its sides and four corners fitted with elastic. The fitted sheet is used mainly as a bottom sheet and the purpose of the fitted bottom is to prevent it from slipping off the mattress.

A blend of cotton and polyester is also commonly used.

What is a bed skirt? A bed skirt, bedskirt, or a dust ruffle is a detachable piece of fabric that goes around the bed frame and hangs down to the floor to cover the space beneath the bed and prevent dust particles from accumulating.

Bed skirts usually fit between the mattress and box spring.

The main use of a bed skirt is to give the bed a stylish appearance without leaving the sides of the box spring too open. The bed skirt covers the space under the bed.

In case you store a lot of things below the bed, you might want to consider having a bed skirt.

A bed cover or bedspread is a piece of decorating clothing with sides that stretch over the bed to or near the floor.

The function of a bed spread is to prevent dust or other matter from contaminating pillows and other bedding during the day.

A blanket is a nicely woven covering mainly used for warmth. It is usually soft and large enough to cover one’s body.

People use the blanket while resting, sleeping or walking in an extremely cold environment.

There are different types of blankets. The following are some of the types of fabrics you will find a blanket is made from:

A blanket serves the same purpose as comforter, duvet or quilt. After purchasing one, the others may not be necessary.

A quit is a warm bed covering made of multiple-layers of fiber at the top, in the middle and at the bottom.

The process of sewing can be used to form decorative element. The resulting pattern makes up an important part of the design of a quilt.

Some of the important life events why quilts are made include birth of a child, marriage, and graduations.

Also, note that modern-day quilts are not made for use as bedding. They may be used as table runners, bedroom wall hangings, among other functions.

A duvet (comforter in the United States) is a soft bedding that is filled with feathers, cotton, down, wool, silk, or other synthetic materials. The duvet is then protected with a removable cover the same way a pillow case works. This removable part of the duvet is known as duvet cover.

Down used to fill duvets originate from geese and ducks. This material is often liked for its soft plumage feel.

Duvet cover is a decorative and protecting piece of bedding that covers a duvet. A duvet usually fit snugly into it.

Most duvet covers are designed to have a functioning button or tie closure at one end that can be used to remove the duvet while cleaning of inspecting it.

The bedsheets, duvet covers, pillows, and all other items in the bedroom come in different colors. Some people like warm colors. Others prefer cool colors.

For those who like cool-toned colors, introducing jewel tones is a usually a great idea. It is not uncommon to see people use earth tones or neutrals when designing their bedrooms.