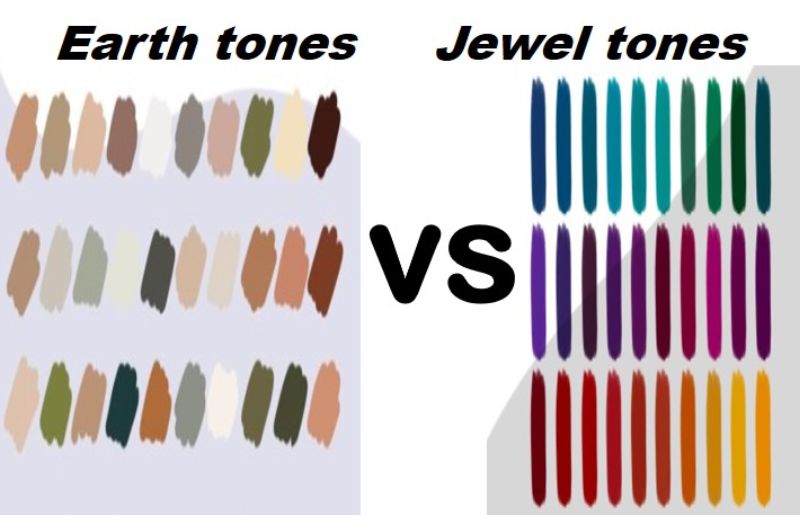 You might have heard about jewel tones, earth tones, and other cool ideas behind these colors. This article describes jewel tones versus earth tones. Some of the differences are indicated in the table below.

To simplify this, there will be two parts of this article.

Let’s begin with Earth tones than finish with jewel tone.

Did you know there are over 70 different Earthy tones? Earth tones are typically inspired by the Earth, soil and vegetation to be precise.

The colors will range from olive green forest covers to rusty red such as those of the Arizonian mountain top. Jewel tones derive their names from colored mineral jewels and gemstones. An example of a jewel-toned color would be sapphire blue, inspired by the gemstone sapphire.

While jewel tones are associated with mined jewelry, earth tones are easily observed in nature including vegetation and land.

With the two color palettes for both Jewel and Earth tones, you can begin to notice the differences even if you’re not familiar with coloring in design.

What are Considered Earth Tones?

Earth tones can have different meanings.

In the narrowest sense, we can describe Earth tone as any color that contains some degree of brown. Brown is usually the color of soil or ground.

Earth tones can also refer to those colors associated with nature such as green leaves, the red sun or a cloudy gray sky.

All these natural colors are versatile and will complement a vast range of other colors.

When you team these Earth tones with other neutrals like white, gray, or black, you get effortlessly elegant designs.

It’s also possible to ground your scheme by pairing them with bright primary colors.

Having looked at one side of the discussion, let’s jump to the other – jewel tones.

Typically, jewel tones derive their appearance from precious gemstones. These stones are not only valuable but also known for their saturated, rich, and intense hues.

Unlike Earth tones that will be abundant in nature, jewel tones often have to be mined. They are also scarce.

The list above just makes up some of the most popular colors in this category.

We also have an article discussing jewel tones in detail and what colors go with them.

Meanwhile here is a summary of colors that go with emerald green, one of the most popular jewel tones.

Emerald green in home design and fashion design go with:

Emerald green will also pair well with other shades of green, for instance lime green.

We will make a jump onto something else.

How different are jewel tones and Earth tones in terms of feel? Which one is warm and which one is cool?

What Should You Pick?

This is one of the most difficult areas to take a side.

Every individual has a unique view of coloring.

Picking between jewel tones and Earth tones is a personal preference. Your environment, event, or room layout will also determine what colors fit.

Are Earth Tones Warm or Cool?

Earth tones are warm. Colors such as chocolate and burnt orange are more appealing and functional in living rooms and other areas we frequent a lot. Due to their reassuring and settling vibes, Earth tones are considered warm colors.

Designers recommend that you use these Earth tones in spacious rooms.

Large spaces can look lonely and to bring a vibe to them, you may need to consider these colors such as terracotta, mustard, and chocolate brown.

Other warm Earthy tones include cream/ivory brown and multiple versions of soft and natural tones.

The only problem is that people perceive Earth tones to be boring.

Also, a lot of fashion designers do not understand how to pair the colors with their existing décor.

What goes with earth tones?

Is Burgundy an earth tone?

Yes, Burgundy is an Earth tone. It is dark reddish-brown, a color associated with many things in nature including soils. Burgundy is often perceived to be refined and old school. It exemplifies gentility, structure and heritage.

Yes, Earth tones are neutral colors with a twist. Since they are derived from nature, Earth tones are predominantly comprised of a neutral base that may be absent in brighter hues such as jewel tones.

Are earth tones out of style?

No, earth tones are not out of style. Designers agree that the colors are solid and are here to stay with us. Without a doubt, most design schemes tend to be grounded with neutrals.

So, you can be sure that using an Earth tone can never go out of style.