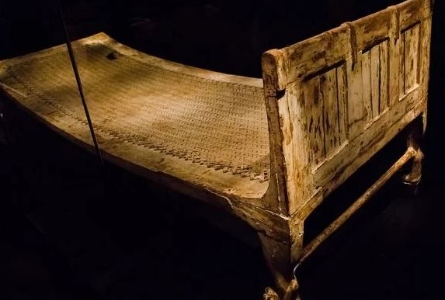 Who invented the bed?

It’s great to learn more about the history of the bed and how the luxury in bedroom has evolved.

A bed is an important piece of furniture that supports a mattress and other bedding and is usually placed in a separate room known as the bedroom. After a long tiring day of work, we all want to retire to a soft comfortable place to sleep. That is where a bed comes in.

Who Invented the Bed?

Ancient Egyptians invented the bed during the Bronze Age of 3000 B.C. – 1000 B.C. Ancient Egyptian craftsmen created the raised bed, which often had legs taking the appearance of animal feet.  People of higher status used the bed to keep themselves asleep above the cold ground and discouraged rodents, insects, and snakes from crawling over the bed.

Since then, the bed has been used for many things.

Today, modern humans use beds for a number of purposes. They include the following:

Most of these functions do not seem to require a raised bed. While some of the uses of beds could be less understood, modern society values the bed for sleeping and getting the “job done.” Here, I am referring to the job of procreation.

In all sense, I think that the Western bed is quite wasteful and unnecessary but for a comfortable and safe sleep away from bugs that crawl on the floor, a bed is just part of the items that make your sleep great.

Sleep is scientifically proven as an essential part of human health, sanity and even daytime creativity.

When Were Beds Invented?

Beds were invented about 23-25 million years ago in their crudest forms. However, the modern raised bed frame as we know them were introduced roughly 3000 B.C. This means that humans have been using the bed for over 5,000 years.

Scientists have traced the bed back to several millions of years ago.

According to a recent revelation by scientists working on prehistoric periods, the oldest known bed was a grass bedding from about 200,000 years ago. This finding was a little older than previously thought.

To keep away arthropods, the early humans used insect-repellant plants and ash layers.

In Egypt, Pharaohs were known for having luxurious beds. In the 14th century BC, Tutankhamun (Tut), one of the most popular Pharaoh’s had a large collection of beds.

About 23-5 million years ago, historical records show that apes had started making beds. These early beds were a little less obvious because they were simply piles of straw or some naturally available materials such as grass, palm leaves or animal skins.

The significant change in the nature of early beds was raising them off the ground. Apes wanted to avoid drafts and pests. I am not sure about their habit of avoiding dirt at that time.

Bedding can be traced to around 3,600 BC after a discovery of remains in Sibudu Cave, South Africa. It was made up of sedge and some monocotyledons topped with Crypocarva woodii leaves.

In one Scottish village, beds in form of raised boxes were discovered between 3200 and 2200 BC. These beds were made of stone and mostly likely topped with comfortable fillers.

Some ancient Greek poems such as the Odyssey mentioned the use of gold, silver, and ivory to make beds. Luxurious!

Looking further into this, ancient Roman mattresses were filled with plenty of reeds, hay, wool or even feathers. These were done especially when custom demanded luxury.

History of the Modern Bed

As late as 17th century, people had started introducing curtains at the head. The curtains replaced enclosed beds that had become quite popular in France.

This period was known as the “century of magnificent beds.” Louis XIV for instance was known to own several sumptuous beds. Some estimate the number to be as many as 413 beds across his palaces.

By the 18th century, there were reports of feather pillows being used as coverings in different parts of Germany. This became the fashion and quickly spread to France.

It is the same century that iron beds appeared. They were favored because they were insect-free, a common problem that would be impossible to solve with wooden beds.

Biggest Bed in the World

The biggest bed in the world is Commissie Zomerfeesten St Gregorius Hertme bed. According to the Guinness Book of World Records the bed made in New Zealand the world’s largest bed. It had a length of 86 feet 11 inches and a width of 53 feet 11 inches.

Its size would be the equivalent of roughly 13 emperor mattresses in length and 8 emperor beds in width.

There are other notable large beds in the world too.

One of these biggest beds is the Great Bed of Ware. This bed was designed and constructed in 1580. It measures 10.7 feet wide by 11.1 feet long. The bed was so big and popular that it got mentioned in Shakespeare’s Twelfth Night. Currently, the bed is kept in the Victoria and Albert Museum in London.

A bed that shares a status similar to the Great Bed of Ware is the Golden Bed that was constructed in 1879 by designer William Burges.

Also in this list of world’s largest beds is Maharajah bed that was made of solid silver. The edges of this bed were man-sized statue of a naked woman holding a fan. Whenever Maharajah would lay on this bed, it would trigger a mechanism that made all the four women at the corners wave their fans.

Parts of a bed

Each of these parts of the bed serve different functions.

For instance, the mattress rests on the bed’s solid wooden or metallic base. Wooden beds are known for hiding bed bugs unlike metallic ones.

Many beds are commonly designed to include a box spring inner-sprung base. This base is usually mattress size and contain wood and possibly springs. These springs provide additional support and rigid suspension.

Beds have an upper side known as the headboard one can rest against.

Some beds such as kid’s beds have side rails.

Beds that are considered “headboard only” can sometimes include a dust ruffle, bed skirt and even valance sheet to help hide the bed frame.

While sleeping on a bed, people usually prefer to use a pillow. A pillow is a soft padded material placed near the top of the mattress.

Also, once again, I’ve heard about people using hard pillows – as hard as a rock. I think all that depends on the purpose of the pillow. If it is for comfort, then a big no. If it is just for raising the head for a short time – a big yes!

Back to parts of a bed, the sleeper could decide to use some form of covering such as the blanket or bed sheet. Today, people love quilts or duvets. All these are collectively known as bedding.

The removable non-furniture portion of the bed is called the bedding. Bedding are washed and aired out frequently to ensure that a bed stays hygienic all the time.

Drawing a bed is as easy as taking a pen and making horizontal and vertical lines. Unless someone has never seen a bed, it is quite a simple process.

I am calling it simple because beds tend to have some basic parts like four stands in the frame, a headboard, and a mattress. One you get these right, one can easily draw a bed off head.

All said and done, you will notice that beds come in different sizes.