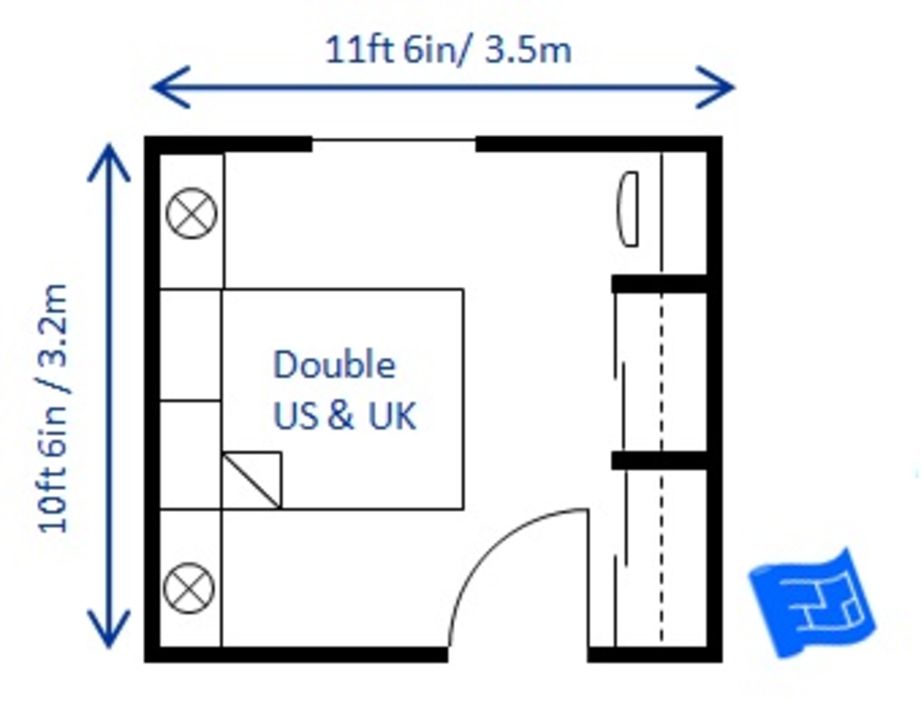 A bedroom refers to a furnished room usually smaller than the living room and is mainly used for sleeping. Most bedrooms have a clothes closet, space for a bed, and standalone window in a mansion, castle, palace, hotel, apartment, condo, and townhouse. The bedroom window is large enough for an individual to escape in case fire breaks out.

The window is usually covered with curtains to block excess light that may interfere with sleep. The curtains may come in different colors. Some people prefer light colors and others love black curtains. It is also common to see saturated colors in curtains.

Even though most of the hours we spend there go to sleep, we end and begin our days in the bedroom. Having an organized and beautiful bedroom could improve your mood when starting the day.

Some people have suggested using Feng Shui rules when arranging the bedroom to ensure that you get the best sleep.

On the same note, you do not want to enter your bedroom after a long day of work and end up incapable of having a peaceful sleep.

How many beds should be in a bedroom?

A typical bedroom would contain at least one bed. Other much larger bedrooms can accommodate two or more beds.

Bunk beds occupy spaces for one bed by the upper bed can make them two. So, it is possible to have more than two beds in a single bedroom without necessarily stretching space.

Your bedroom, however, is a reflection of your personal tastes and preferences. Not everybody desires a room that is “average” in size. Some people prefer a small bedroom and a big living room, while others prefer the opposite.

A typical standard bedroom would serve as a gym, office, games room, home theater, or study room. Normally, this room has one window and a wardrobe. A typical bedroom is 202 square feet on average, but it can vary between 109 and 299 square feet depending on whether you live in an apartment or a home.

You can usually fit a twin bed in such a room, but you’ll need at least 70 square feet to fit a dresser and a bed with enough walking space. A typical bedroom should be at least this size.

However, for a king-size bed, the bedroom must be at least 145 square feet in size.

Many factors go into planning the size of bedroom. The nature of furniture you plan to place inside, the size of the house itself, the location of the sleeping room in the plan, among other factors.

So, what is the standard bedroom size?

A standard bedroom size is 70 square feet of floor space. It should be 7 feet X 10 feet and a height of 7 feet. Home owners who want a sitting area in their bedrooms, space for tables and chairs together with circulation are might need at least 8 feet by 8 feet sized bedroom for all those requirement. So, a 10 foot by 10 foot size is considered standard.

All in all, bedroom sizes vary depending on the legality of construction authorities for each country.

The bedroom can have different parts including a clothes closet, a dressing table, a washroom, a bedside table and space for a some seat.

In ranch style homes or one storey houses, the bedroom is often located on the upper floors.

Master bedroom is the main or the largest room in a house or an apartment building. Typically, the owner of the household sleeps in the master bedroom.

The next time you hear about master bedroom, expect the following characteristics:

The master bedroom is the biggest and can be up to 370 square feet in size. This is a luxurious scale that is typically found in homes larger than 3,500 square feet.

A master bedroom in most other average-sized and modern homes is about 200 to 300 square feet.

A king-size bed requires a master bedroom that is big enough. Usually, this bed is 10 feet by 12 feet in size. Your bedroom will most likely have other furniture pieces in addition to a bed, so the space must be large enough to accommodate a large bed as well as other items. A master bedroom is usually square or rectangular in form, but it can be any shape.

The average size of a master bedroom in a home under 2,000 square feet should be about 230 square feet.

The average master bedroom size rises by 40% to about 400 square feet in homes greater than 3,000 square feet. It’s around the same size as a typical kitchen.

Children’s bedrooms do not need the same amount of space as adult bedrooms. Usually, they have one window and a tiny wardrobe. Such bedrooms are often converted into study areas or gyms. These rooms account for roughly 17% of the total square footage of the home.

A child’s bedroom should be 11 by 12 feet in size. There are, however, smaller toddler rooms that are 10 feet by 10 feet in size.

Read More: Detailed Size and Cost of a Child’s Bedroom

When it comes to planning a child’s bedroom, one of the most important considerations is the size of the bed.

If you have a double bed, for example, the child’s bedroom should be at least 11 feet by 11 feet to ensure that the bed fits easily with some walking space. You should also consider how well the furniture you want to put in this bedroom would suit. Enable 12 feet by 12 feet if you intend on placing a double size bed as well as some furniture such as a bedside table and a closet.

The lower class people slept on mattresses that were stuffed with hay or soft objects such as broom straws, feathers or animal skin. Feathers never became popular until the 16th century when many people could afford them.

In fact, at the time, the common person was doing well if he could purchase one of these mattress after 7 years of marriage.

Cotton and wool then started to become the norm in the 18th century.

It was until 1871 that the first coil spring mattress was invented.

In countries like Japan, the notion of having a bedroom is much less of a concern than in the United States.

An individual’s taste determines what kind of furniture goes into the bedroom. Traditions and socioeconomic status also determine the furnishing.

One who cannot afford expensive large beds and mattresses, mirrors, cool lighting, dressers, and all other fancy aspects of the bedroom can only get comfortably with no-so-good bedrooms.

Other than a bed, modern bedrooms have the following:

Others have television sets, video game consoles, reading desks and much more. So many other items known as bedding add to the aesthetic of a bedroom.

Since many years ago, bedrooms have always been used for sleeping. However, that does not mean they are supposed to be dark. A bedroom requires a combination of different types of lighting systems to give the best illumination.

People need to dress or apply makeup in the bedroom. Others like to read in there. All these are impossible when the bedroom is completely out of light.

We have different types of lighting such as accent lighting and decorative lighting. Some lighting systems will often highlight the architectural features of the room while others will be decorative.

Color combination can make a room feel in a particular way. Consider a movie scene that makes the audience shed tears. It is the effects of colors that play a key role in lifting and transporting the audience to that different mood.

On that note, getting the bedroom lighting and coloring just right is important for creating the most comfortable place to rest.

People can use color combinations in their bedrooms to show their personalities, create a particular mood and recreate different ideas they desire. Choosing the best colors for the bedroom is a step towards having a peaceful night sleep and waking up fresh in the morning ready to take over the world.

Number of bedrooms in a house

A typical house in North America has at least two bedrooms going up to several bedrooms. The master bedroom is supported by another one or two bedrooms for kids and guests.

As one of the largest buildings on the planet, Buckingham Palace, which has 775 rooms has 52 Royal and guest bedrooms and 188 staff bedrooms.

This is an apartment with a separate kitchen, bathroom, living areas and two separate bedrooms. One larger bedroom and another relatively smaller bedroom.

Each bedroom has individual doors and safety installations such as fire alarms.

Regardless of how much your sleeping room is decorated; and no matter how comfortable your room furniture is, sleep destroyers are invasive bedroom insects.

The last thing one wants to be doing in the bedroom is picking bugs rather than sleep.

So, what are the common insects that could spoil your night sleep?