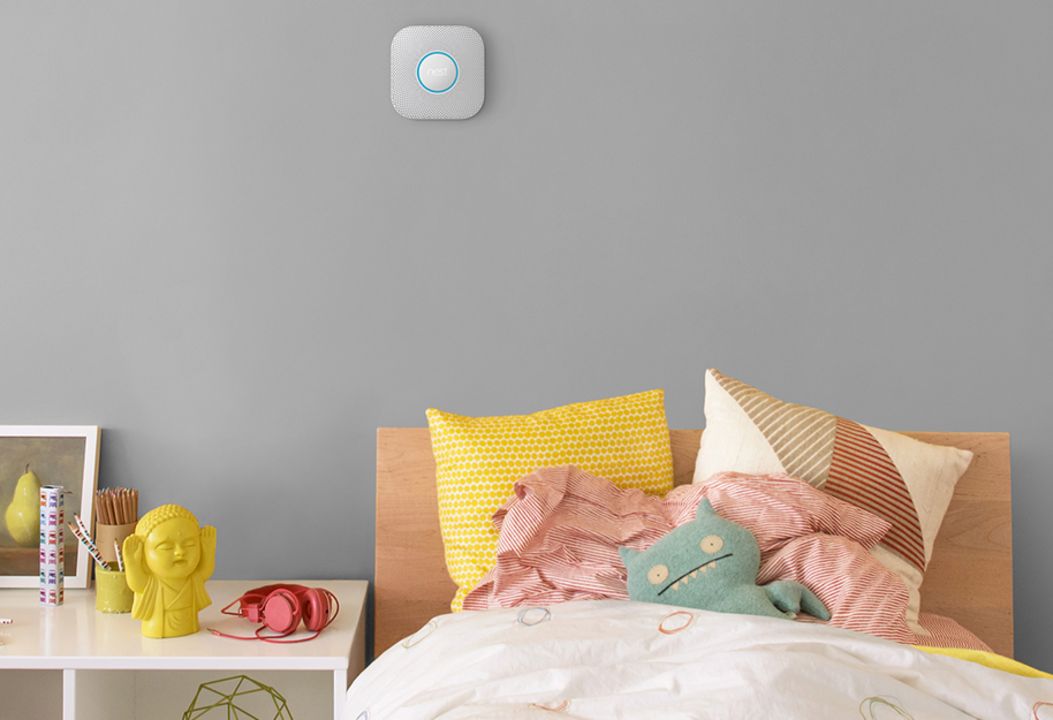 In the bedroom, install the smoke detector inside or directly outside the room within a foot of ceiling away from bedroom window, air conditioning, vent, or duct. These drafts can interfere with the detector’s alarm system leaving you extremely vulnerable.

We understand that smoke rises. Therefore, you need to mount smoke detectors in high regions close to ceilings. This is the best location for smoke detectors because it will allow faster detection of fire.

Where Should Smoke Detectors be Placed in Bedrooms?

We’ll use the NFPA’s experiment to help us offer you a definitive answer; they’ve gone to tremendous pains to figure out a solution to this problem.

Smoke detectors in a bedroom should be at least 36 inches (3 feet) away from the tip of a ceiling fan blade, according to common knowledge.

It can be proven, based on experimental data, that a ceiling fan will not prevent smoke from entering the alarm. Also, the direction of the fan doesn’t matter, especially if the detector is 3 feet away from the blade’s tip.

A fan, on the other hand, will cause a delay in detection when it is turned on. In general, the longer the detection, the greater the fan speed.

Why you need a smoke detector in the bedroom

While we are deep asleep, it is difficult to tell what is going on around us. Smoke detectors are our best line of defense against possible injuries caused by fires in the bedroom.

Here are the reasons why you might need a smoke detector in the bedroom:

The type of smoke detector to install in bedroom

The best smoke alarm type to install in the bedroom is an ionization alarm. The reason I recommend this is because they are better at detecting even invisible particles from flaming fires that start in another room.

However, for maximum detection of fires in your bedroom, you might consider adding both ionizing and photoelectric alarms.

Photoelectric alarms are those detectors that go off when there are bigger fire particles floating around, for instance, from slow, smoldering fire.

Dual alarm sensors can be merged into one powerful device that serves you in the best way possible.

Regardless of the type of brand of smoke alarm, interconnecting all the alarms in the room so that when one alarm sounds, all the rest including those in your bedroom will sound too.

Currently, manufacturers offer a number of interconnected smoke alarms that one can easily set up.

Do’s and Don’ts of installing the smoke detectors

Always remember to do the following:

What do you need to avoid when installing smoke detectors in bedroom?

A photoelectric smoke detector is designed to detect smoke as it spreads across a vast area, and it can be extremely sensitive to even the smallest amounts of smoke, especially in rooms with high ceilings.

They function by projecting light into a sensor chamber. There is nothing to impede this light under normal circumstances, and the beam remains unbroken.

When smoke enters the chamber, however, the particles in the smoke disrupt the light beam, preventing the sensor from receiving the light and setting off the alert.

In contrast, an ionization smoke detector contains two plates between which a steady flow of charged ions is conveyed. A current is created between the two plates as a result of this. The current is cut and the alarm rings if smoke enters the chamber with the ions and disrupts their flow.